I had heard from other mom friends that the transition from bottles to sippy cups could be a tricky one.  So, I tried to get ahead of the game and introduced a sippy cup with a straw to Rocklyn just for water when she was about 6 months old. She barely drank out of it at first but would just gnaw on the straw, play with it, then after about a month she figured out she could get water out of it and actually started using it. Before long she was sucking down water like a champ with her food. I gave my self a high five and thought, “great, when it is time for milk this will be easy peasy!”.  Not exactly.

Admittedly, I had a hard time making the decision to take the bottle away from her.  Mostly because I was being a sap about it. But Alas, I knew after her first birthday we had to get down to business.  So again, I figured I would just put milk into her usual water cup and we would be all good.  However, anytime I would put milk in the cup, she would push it away or throw it.  As if she was like, “um mom, milk doesn’t go in there that is for water only, duh”. I ended up buying a different sippy cup that also had a straw so as to separate the idea of water and milk for her.  So,  the one I ended up committing to for milk was this one: 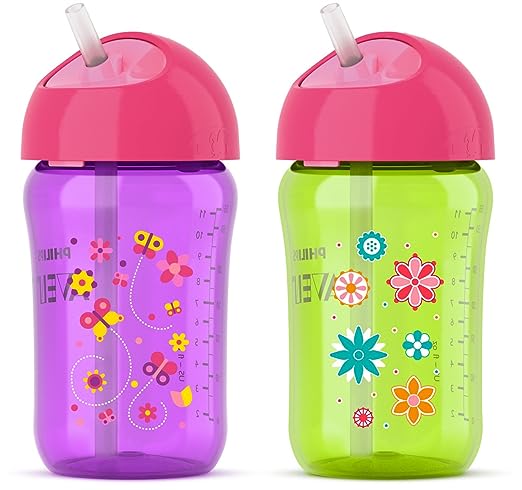 At this point, she was only getting milk 2-3 times a day, therefore it was no longer her sole nutrition.  This was a good thing because when we took the bottle out cold turkey, she went from drinking about 15 oz a day to maybe 6oz.  She would take a couple sips and then throw it down.  But I would never swoop in with the bottle, we just kept trying and kept offering it to her.  I would say it took her about a week before she started taking all the milk out of the sippy cup. So, the first few days I was indeed a little panicked, but I was also more sad. I could tell she really wanted her bottle and was getting frustrated and that made me feel so bad.  But again, after a week she seemed to care less, I was just being a sap.

I have learned over the years of watching other people’s kiddos and now raising my own that consistency is key for all ages.  Especially when it is time to change something up or enforce a new behavior.  Giving in can take you a million steps backwards and these little buggers know how to play you!   I am pretty sure no adult has ever brought up in counseling how traumatized they were when their parents took away their bottle or pacifier, yet doesn’t it feel like that is what we are doing to them when we go through a change?  As it turns out, it is harder for us than it is for them, almost always.

See picture above with my happy child drinking her morning milk out of her sippy cup.  Bottle?  What is a bottle?

Oh, breastfeeding.  The topic that seems to have been quite the “rage” if you have become a mom in recent years. I really do think it is so fantastic that normalizing breastfeeding has become such a big thing after it seemed to take a little bit of a hiatus. However, I also think sometimes it can be a little too much in our face.  One more thing for Moms to feel guilty about or pressured to do, because let’s get real for a minute here..breastfeeding is natural yes, but it is not easy. At least, that was not my journey.

There are three things that as a Mom I am very OCD and particular about.  Sleep training & schedules/routines being two of them…solid nutrition is the other. SO, that being said, breastfeeding was something that I knew I wanted to do if I was able.

I did not have supply issues.  Rocklyn did not have latching issues. It was pretty smooth from the get-go in that regard.  But I DID have weird anxiety issues.  I dreaded every time I had to nurse and to be honest I really could not tell you why.  I did not feel comfortable doing it in public as my milk tended to spray and make a mess everywhere, I would barely even feed in front of my husband at home.  During almost every single feeding I would take my daughter into the nursery to feed in private and I put music on every time to calm my nerves.  I knew that if she felt me being nervous, she would be nervous so I worked very hard to real that in. When she was two weeks old, we introduced a bottle at night.  This was my chance to pump a bottle and get to bed early so that my husband could stay up later with her and give her the last feeding.   Once we got in this routine, I always got a head start on sleep which worked out GREAT in those early weeks.  During that week in particular she did have a little confusion between nursing and bottles, but it passed pretty quickly and she was able to bounce back and forth as needed.

However,  when she was around 8 weeks old, we accidentally used a fast flow nipple on one of her bottles for a few days instead of the natural flow we had been using.  That week she fought me HARD for the first time when nursing and wanted nothing to do with me.  My assumption is that she got a little spoiled with the fast flow milk and did not like the slower pace of the milk coming from me.  So, at this point, I talked to a lactation consultant who recommended doing no bottle for 3 days to get her back on track. However, after really thinking about it, I decided to use this as my out and switched to exclusively pumping. Meaning, she would still be getting 100% breast milk, but it would be all through bottles and no nursing.  I won’t lie, this was actually a huge relief for me as I mentioned, I just did not like nursing.  I was a little sad when I nursed her the last time, knowing we would make the switch, but most of me was really relieved.  The first few weeks of pumping exclusively was great, it took a little juggling but I really felt so much better and less stressed  and anxious.  Then I went back to work.  OOOF. Once I went back to work, it took much longer for me to pump my milk since I was away from her all day, this is apparently normal.  When at home, I would pump 15-20 minutes and get 8-12 oz at a time.  Once I went back to work, it took me 45-60 minutes to pump the same amount. I rarely would take a lunch because of all the time I had to pump, and it was really stressful to find a place to go at work not to mention trying to fit it in between meetings.  My boss and other co-workers were very supportive, but it still stressed me out.  I also pumped on my drive to work and on the way home every day to free up time, which was a lifesaver.  In the morning since I would still workout at 5am, I would get up at 3:30am to get my hour long pump in BEFORE the gym, otherwise I would be too uncomfortable. It was so much work and I felt like a slave to that machine. It truly owned me. I tried to be as positive as I could while pumping and use the time to read, journal, etc. But man, spending 5 hours a day attached to a milk machine, just drives you insane sometimes. I had to miss out on a lot of things because of my pump schedule, and it certainly made doing fun things on the weekend difficult too.

I really wanted to have Rocklyn get breast milk for a full year, it was really important to me.  Luckily, I did have good enough supply to create a little stash but around the 8 month mark, I just had had it.  I wanted my life back.  When I did the math, I had about 3 months of milk stored in our freezer for her, which meant that she would need to switch to regular milk earlier or get formula during her 11th month.  I decided it was worth it and pulled the plug…literally.

My husband would tell you that the week I stopped pumping was the week I went back to my “normal self” again. I was less stressed, less irritated by him (I held some resentment issues for having to be the one to do all this at times) more rested and just had so much more freedom. It was awesome.  However, I did of course still have guilt for quitting early. I really was hard on myself for  not trying to push another month.  Especially because Rocklyn only ended up needing formula for 2 weeks before we switched to regular milk.  Really Jill, you couldn’t have done TWO MORE weeks of pumping after doing it for 8 months?  But to be honest, I really don’t think I could have!  The day I decided I was done, I was really at my limit.

There are very few things I am nervous about with bringing baby number #2 into our house but entering into this journey again is one of them.  Maybe I can try to enjoy it a little more this time around and nurse longer, the fact that I work from home now will certainly make things a little easier, but it will still  be a bit of a juggling act with a toddler running around.   We will see how it goes, send me your good vibes 😉 Don’t miss any inspiration. Grab a cup of coffee, pull up a chair and subscribe here!